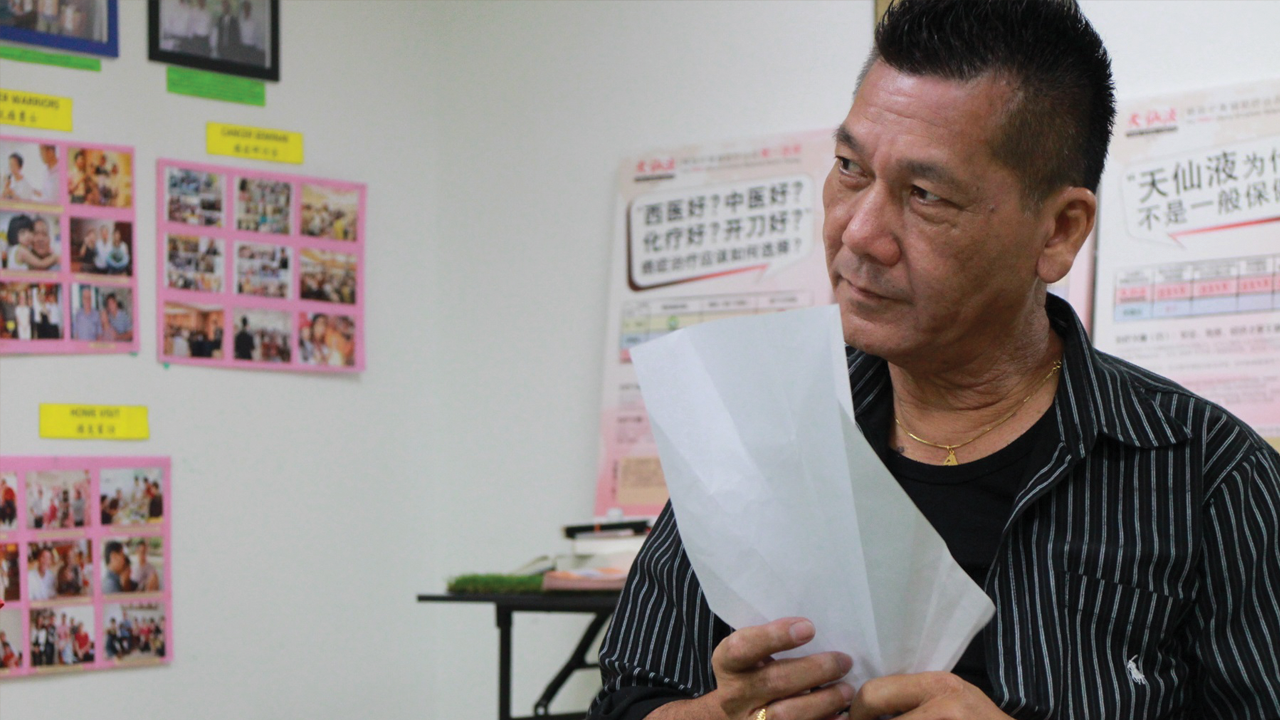 Colon Cancer Survivor: Never Give Up

I was diagnosed with colorectal cancer stage 3 in August of 2014. I had not been feeling well so I went to the doctor for a check-up. After several tests, the doctor found a ball-sized tumor in my large intestine. It was cancerous. I went through major surgery to remove the mass.

Emotionally, I felt down; I couldn’t eat or sleep. A few weeks before the operation, I even went to buy rat poison with the intention of ending my life. I lived alone and I didn’t like asking for help. I saw what my friends with cancer went through — it was sheer misery for them. I thought that it might be better to end my life before my health deteriorated further.

The doctor did not tell me how many months I had left, but based on the survival rate of my friends with cancer, I reckon it’s usually 3 to 6 months.  I never thought I could survive for more than a year; I even started imagining what my death would be like. Then I saw my daughter, who was trying to cheer me up. She inspired me to keep on living as I want to see her get married and have children.

I had surgery on Oct. 12, 2014. The doctor told me the operation would take 5-6 hours, but it actually took longer. I went into the operating room at 8 a.m. and was in the recovery room by 8 p.m.  My daughter told me that during the surgery, whenever a nurse or doctor came out of the operating room, she would ask about me because she was so worried.  I realized that it was harder for the family waiting for word about the patient than what the patient had to undergo.

I also realized how much support I had from my family, even though their silent support that could not be expressed with words. When I emerged from the operating room and I greeted my daughter — the expression of relief in her eyes was truly wonderful.

After recovering from surgery, I was still very weak and thin.  The doctor said the next step was to take chemotherapy and electrotherapy treatments.  I prepared myself for the side effects that would result from chemotherapy — hair loss, diarrhea, fever, vomiting, etc.

However, a good friend told me about a certain Mr. Chai who also had colorectal cancer, but stage 4. He has remained very active, goes hiking, travels, and is still very healthy. He said I should contact Mr. Chai.

On the phone, I asked Mr. Chai whether he was worried and afraid since he had stage 4 colorectal cancer. He said that when a trial comes, one must face it and accept it. Then he introduced me to the Dongbao Enterprise Cancer Center to see what the center can do for me. I asked him how long he has been in stage 4. He said about 1-2 years. A gush of hope blew through me.

Later, we met at Dongbao. They taught me how to regulate my body. No one forced me to take medicine. They just taught me know how to take care of the body.

The folks at Dongbao told me to take Tianxiang liquid. The drank it first thing in the morning and the next day I had a lot of energy. I also tried Tianxian Pills 1, No. 6, and No. 7, which made me very enegetic even when I was weakest. On the third day, I fetl well enough to go out to eat. Everyone said that I had a lot of energy.

So don’t give up. If you get cancer, don’t be afraid but relax and accept it. As long you have hope, there is a chance of recovery. I lived long enough to see my daughter get married and give birth to my grandschild, so I cherish the happiness I have now. I am active every day. I don’t know how many more years I will get to live, but I am not going down without a fight.