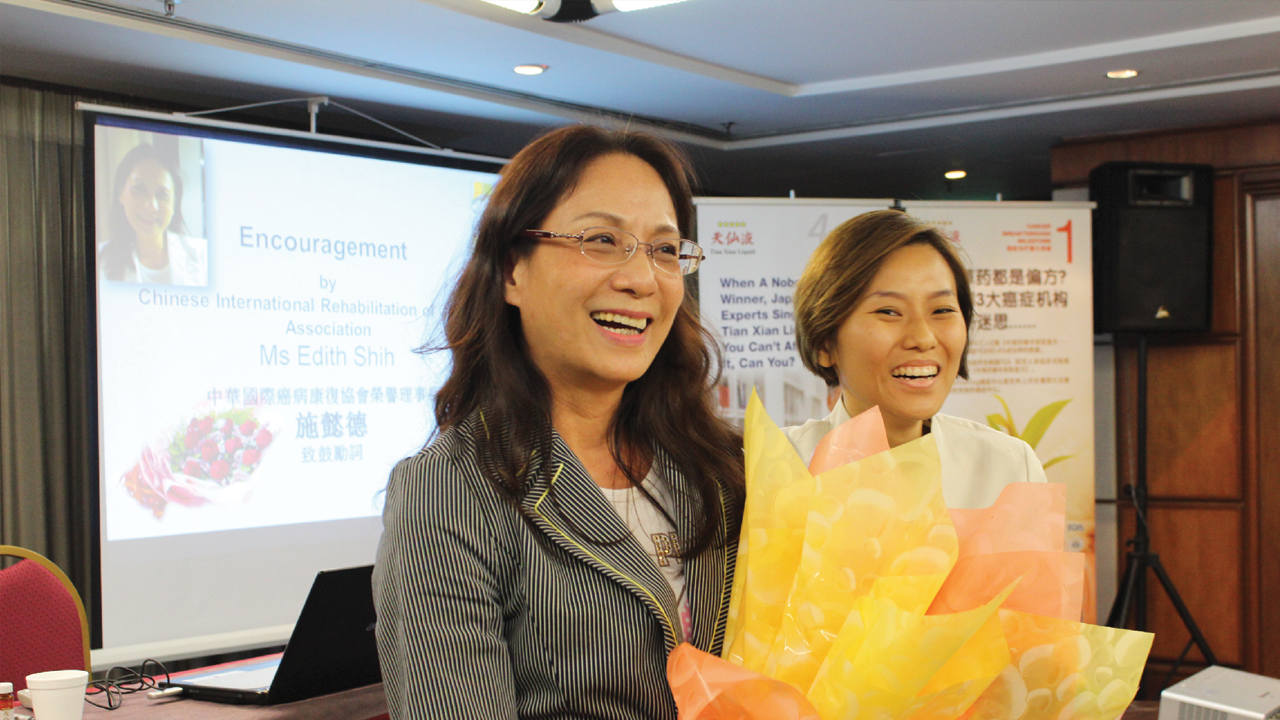 Breast and Cervical Cancer Survivor: I’m Healthier Now Than Ever Before!

I have been sickly all my life. My immune system was weak and I was one of those students who would faint at my school’s morning assembly if I stood too long. So I took it easy. The thought of improving my health had never crossed my mind.

In 1998, I was diagnosed with cervical cancer. My doctor in the United States suggested the removal of my entire uterus. I did some research myself, and also went back to Taiwan and consulted my gynaecologist. I talked to several women who had undergone the same procedure, and they all told me the same thing: apart from the hormone replacement treatment, the body would suffer from various discomforts. Eventually, I decided to undergo a cervical conization procedure.

I felt fine after the surgery. Hence I did not put any effort into trying to improve my lifestyle. I simply never thought that nightmare would come back again that soon. A year later after the surgery, I was diagnosed with breast cancer. Distraught, I told myself that I should not ignore the sickness anymore. Cancer recurrence and metastasis are horrifying! For the first time in my life, I decided that I should take care of my health.

When I was in the United States, the doctor suggested removing the entire right breast (or only partial removal) and then combine the resection with postoperative radiation therapy and chemotherapy. I chose to perform the partial resection procedure (only tumor), and to adopt radiation therapy but not chemo. I visited the place where patients were undergoing radiation therapy. I noticed that they were all in anguish. The whole atmosphere of that place made me feel really uncomfortable. I asked my doctor why I had to undergo chemotherapy. He said that it was a preventive treatment. I told him that I did not want to suffer from a preventive treatment. However, my doctor would not agree at all, not until I signed an affidavit.

The Head of the Surgical Department at the University of California School Of Medicine once said, ‘If any of my family members are suffering from cancer, I would consider the surgical procedure, but chemotherapy and radiation therapy are definitely not an option.’ I understand what she meant. If I had to take preventive measures against cancer, I would like to choose the treatment.

Don’t Wait Until It’s Too Late!

During those seven weeks of radiation treatment, I maintained a healthy lifestyle. I woke up every day at 7 a.m. in the morning, and then went for a walk in the neighbourhood after breakfast. I had neither worked out nor had I sweated all my life up till then. But then because of the regular exercise, I started to sweat. I always took a hot bath after the exercise. Not only did it improve my blood circulation, but it also soothed my mind and created a pleasant mood. Then at around 9 a.m., I drove to the hospital for the radiation therapy.

Every day I continued to work out, go for a walk, take hot baths and drink Chinese herbal medicine TXL in order to boost my immune system. Up until the final week of the treatment, I was still driving to the hospital by myself, and would walk into the hospital unaided. Even the doctors were amazed by my stamina. After seven weeks of treatment, I was awarded a medal of courage as a souvenir!

When our body develops cancer, it is like having a ditch filled with sludge. In order to keep the ditch clean, one has to first clean out the sludge thoroughly, and then wash the ditch constantly with fresh water. That is the reason why I did not give up maintaining my personal health even after the completion of therapy. I wanted to keep the ditch clean.

But old habits die hard. It took me at least seven years to improve my health in general.

Now, I eat vegetables, bean curd, grains and nuts every day, and maintain a healthy lifestyle. For me, a simpler approach is better. It doesn’t require one to go to the mountains or to make any great changes. I had a friend who believed that drinking raw potato juice could cure cancer; therefore he drank only potato juice every day, but he died later.

Listen to Your Body!

Everyone has a different body constitution. You know your body better than your doctor! That’s the reason why I think one should always listen to their own body.

I am a person with an acidic constitution. So I cut down on eating meat and I avoid desserts. I once read a medical report saying that refined sugar will eliminate vitamins that are good for our body. Since then I have avoided sweet drinks.

It is amazing that since I started to improve my constitution, my body naturally resisted the food that is harmful to it. My body’s ability to cure itself has also improved, and my immune system got better as well. Before, there were many kinds of food that did not sit well with me. I could not sleep deeply either. Now not only can I eat more, but I can also get a better sleep at night.

I used to be aggressive, a perfectionist and impatient. I put too much pressure on myself. I don’t want to be that way anymore — that is the lesson I have learned in my spiritual development.

From my own personal experience, complementary and integrated medicine do address both the symptoms and root cause of a sickness. This approach combines the advantages of traditional Chinese and western medicine — nursing one’s health in a comprehensive way to include both mind and body along with exercise, Qi Gong, yoga, a macrobiotic diet and Chinese herbal medicine.

So listen to your body and choose the most suitable approach to taking care of your health. Let the body maintain its ability to heal itself. Thanks to my experience, I’m healthier now than ever before!