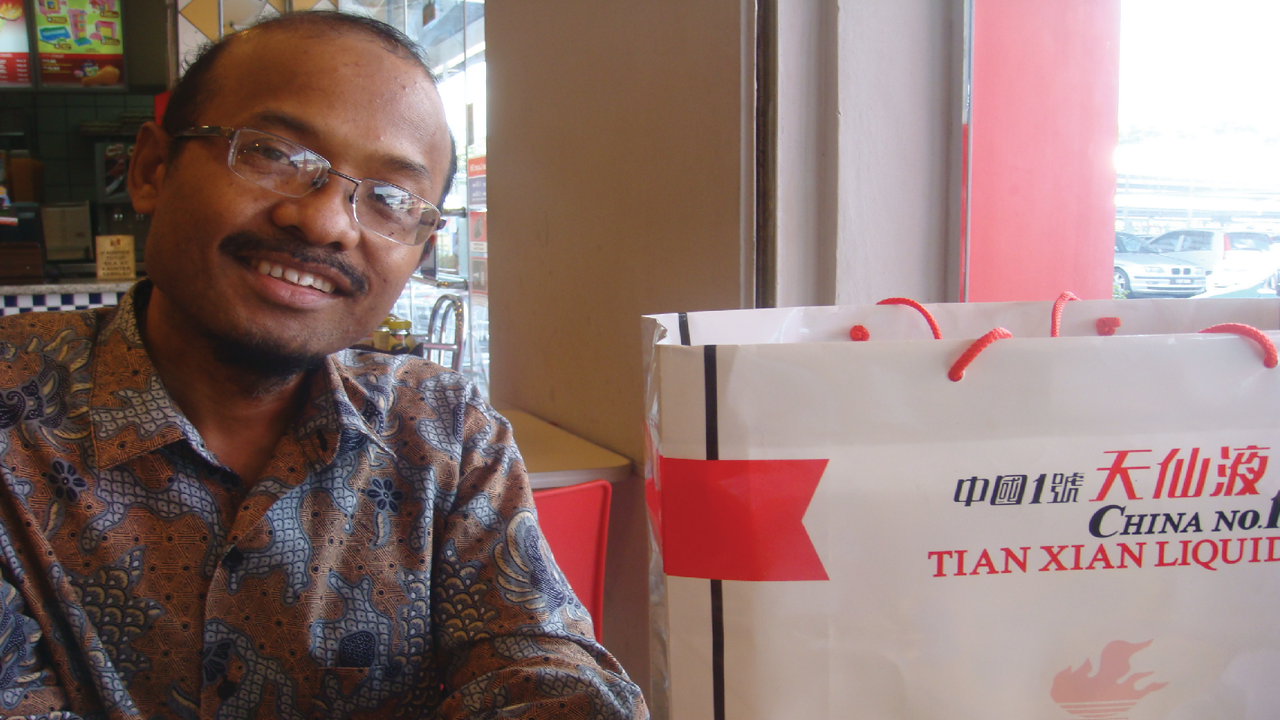 I grew up in the suburb of Sungai Petani in Kedah. My life was pretty good. I married a wonderful and virtuous wife. I had two loving daughters. But one day, my life turned upside down.

In 2002, I began to feel a heaviness in my head and suffered frequent headaches. I thought it was time to get a less stressful job. In early 2003, I did switch jobs — I became a school secretary. The work was much easier than my previous job. Even though I did not have a high salary, I had more time to spend with my daughters and wife.

However, my headaches got worse. The one or two tablets of anaesthetic I took stopped working. Private clinic prescriptions did not help either. I became very sensitive to light. Bright light made my headache worse. I often stayed in my room to avoid sunlight. Sometimes my headache would last for 24 hours, accompanied by dizziness, vomiting and other symptoms.

I had Brain Cancer

In May 2003, my headaches became more frequent and my vision was blurry. My left eyelid drooped down and I could not open it. I went to see a doctor at the Kuala Lumpur General Hospital. After a medical scan, the doctor told me that I had a 3 to 4cm tumor on my pituitary gland. It was called “pituitary adenoma,” a kind of brain tumor. Since it was growing bigger, it was pressing my cranial nerves and causing my headaches. Now it was pressing the left optic nerve, so it affected my vision. The worst outcome would be a hemianopia of one eye (unilateral hemianopia) or of both eyes (bilateral hemianopia).

The doctor advised me to have surgery immediately to remove the tumor. But the success rate of the surgery was only 50%. But I had no choice. My wife stayed with me during my hospitalization, and gave me great support and help. She is a strong and positive woman who encouraged and helped me overcome my pessimism. She also kept asking other doctors for advice and hoped to find an alternative treatment so that I could avoid surgery.

There’s always a better way! One day, I was reading a Malay magazine in the hospital and I saw an article about the efficacy of TXL (Tian Xian Liquid). Although there were many types of anticancer products and healthcare products on the market, I was particularly interested in this medicine. I showed my wife the article and discussed it with her. My wife had a relative who was a doctor so we asked for his advice. He encouraged me to try this medicine.

At the time, I was quite fragile. When I first drank TXL (Tian Xian Liquid), I developed a headache and it would last for a few hours. I was a bit worried but my wife was very calm and believed that the medicine was working. I just needed to stick with it and I would be fine. With her encouragement, I persevered and got stronger.

About two weeks later, I told my wife my left eye felt better. She looked at my eyes and said, “Your eyes are open!” I was so happy. A month later, we went back to the hospital for an examination and the doctor was surprised to find my condition improving. The tumor had shrunk to one centimeter. The doctor said I could open my eyes because the tumor became smaller and it was not putting pressure on the nerves. So my wife and I became more confident in my recovery and we were also careful to switch to a healthy diet.

In March 2004, the results of my medical scan showed that my brain tumor had disappeared! In July, an MRI report confirmed that it was gone. My life went back to normal. I want to thank my wife for her care and dedication to me, helping me recover so quickly.

My Wife Got Cancer, Too

I regret that I was not able to convince her to take TXL (Tian Xian Liquid). I watched her suffer from cancer and tortured by the chemo and radiotherapy. In May 2009, she passed away. I was heartbroken and no words could describe my pain.

My wife sacrificed herself so I could live. I will never forget it.