Three years ago, I felt something very wrong with my throat after I vomited. I tried to ignore it at first, but I had difficulty swallowing and the problem got worse. My daughter took me to the doctor an X-ray showed that there was a 10-cm tumor in the middle of my esophagus.

The doctor said I was too old for surgery so I just went through radiotherapy and chemotherapy. But I continued to have trouble swallowing. In addition, the side effects of the therapies made me tired and nauseous. 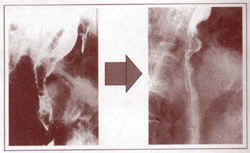 Then my son-in-law learned about the anti cancer effect of Tian Xian Liquid. He bought some for me.
After two weeks of using Tian Xian Liquid, I was able to take liquid food. After about a month, all the side effects were gone and I was starting to eat soft food.

“An X-ray test showed that the tumor had shrunk by one-third.”

Three months later, an X-ray test showed that the tumor had shrunk by one-third. The doctor was surprised and claimed that it may be due to the radiation and chemo.

However, I firmly believe that it was due to Tian Xian Liquid. I continued to get better.

That was three years ago, and I am now fully recovered.